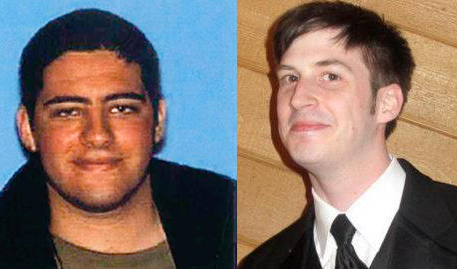 The Santa Monica College shooter, John Zawahri, shot at Spencer Goodman three times and missed. Spencer had only been working as a student services clerk for less than a week when the senseless attack found him in the middle of it. A year after the shooting and frustrated by inadequate funds for the right PTSD therapy, Spencer writes a candid, sometimes angry, and ultimately forgiving letter to his former assailant.  – David Brundige

I’m sorry. I don’t know what experiences or lack thereof you’ve been through in your life to make you feel so isolated and alone. The world is a bitter, cruel place; the only way one is able to navigate their way through the maze of thorns intact is together. I, too, feel disconnected from others, reality, and even myself…and often. But you managed to convince yourself that you are the victim – that the world painted a target colored in the woes of misery on your back.

You did what you feel like you needed to do in order to be heard. Congratulations. You were heard. I heard you. Those five innocent, unlucky bystanders heard as well, even though they were also complete strangers to you. I cannot even imagine the message you sent to your mother that will ring loudly in her ears for the rest of her grieving life. Was it your intent to leave her the sole survivor of her family, powerless to stop you from executing everyone else in your family?

I want to forgive you. I should. I need to. But I don’t know how. You succeeded in your mission. You managed to bottle up all your pain and rage that you experienced throughout your life and channel it into your actions on that sunny day of June 7th, 2013. You have passed all those feelings of fear and horror onto me as well, amplifying my own that were already residing inside me, lurching around behind the scenes, yet omnipresent like the microwave background radiation of our universe.

You took me away from me. I’m a shadow of the person I once was before I came in contact with you. I now think similarly to how you must have thought: all rays of hope and sunshine being snuffed out with overwhelming feelings of terror, trauma, grief, fear, shame, blame, anger, sadness, mistrust, disillusionment, and frailty. You managed to steal the ounce of dignity I managed to preserve for myself.

Gone. Sometimes I remember. Every day is hard work for me, clinging onto my previous identity, a critical yet cheerful, optimistic man. Sometimes if I hold on for long enough, old Spencer reenters me for a moment and I manage to forget. But the memories you’ve instilled in my brain play on a loop, forcing me to watch and experience the horror show you created over and over again. And that’s just during the day.

That’s the good part. It’s the nightmares that end up confirming and amplifying those fears. I was you in a few of my dreams, and I felt myself taking pleasure in shooting human beings in their backs as they ran away from me, fleeing for their lives. I watched them spread like roaches when the lights turn on – a perfect visual representation of my insides – scattered to the wind, running without a rudder, no concern for those who are also attempting to escape from your indiscriminate bullets. Everyone for themselves.

Then I awake. Some mornings when I wake up after these demonic nightmares, I’m either screaming, crying, laughing, having wet myself, or convinced that I’m still awake, unable to break back into reality. Panic. I can’t breathe. I stand up and take a few steps around the room, not knowing what to do. I’m dying and I’m powerless to do anything about it. My dog is crying and barking at me. I can’t focus and I still can’t manage to take a full gasp of air. I’m hyperventilating. My thoughts are running ramped with images from my dreams, coupled with my actual memory of you chasing me down the hallway, firing shots as I bob and weave as if there were a swarm of deadly bees behind me.

In the last year, I have suffered from two anxiety attacks and one full-blown panic attack that could have hospitalized me. Never before have I ever suffered from any ailment like this before. Shame. The most loyal dog I’ve ever had is scared of me – and scared for me – shivering in the corner of the room. I eventually settle down, focusing on each breath in, then out, in, then out, afraid I’m going to throw up or simply pass out.

You have it easy. You may be dead, sure. But it’s everyone else who was there that day who has to live the events over and over. Perhaps if you had lived on and carried the memories of your actions, you might have one day seen the senseless, misguided cowardice. Maybe after 30, 40, 50 years, you’d wake up one morning and think about the day that put yourself in prison for the rest of your life. Maybe you would think about all those dozens running away from you. Maybe you would think about Margarita Gomez, Marcela Franco, Carlos Navarro Franco, Debra Fine, your brother Christopher or your father Samir.

Do you feel empathetic towards them? Do you finally see how you disgraced them as well as yourself? That’s how I found Spencer Franklin Goodman again. Me. It all came from rediscovering and understanding everyone’s struggles, no matter how disconnected they are from my own life, including you, John. I’m so sorry that you felt the only way for you to communicate your feelings was with terroristic violence instead of using your thoughts and words.

There’s only one good fight worth fighting, and it’s in the opposite direction of guns and fists. It’s simply not fair that shooting up a public college was your means of expression. Obviously, everyone other than you got the short end of the stick that day – you sought to that – which was kinda the point, wasn’t it? Control. I see now, a dark shadowy figure dressed in all black, the barrel of your assault rifle magnified to the size of a tank cannon. I’m still scared for my life. However, slowly but surely, sadness overpowers the other emotions stirring inside me.

By the end of the day, there you were, lying face-up on the sidewalk of Pearl Avenue with a bullet in your brain. With permission from the police, I stood over your body and hovered there for longer than I should have. I was disoriented from the shock and trauma you already caused but I mostly felt sorry for you. A few minutes beforehand, you were a cold-blooded killer. Now you’re just a statistic, another honorable mention in the discussion of the ongoing campus shootings plaguing our country. Our first meeting, I saw you as a wrathful, dark-figured titan wielding a mighty weapon. Now you’re just a dead boy on the side of the road wearing cheap black clothes from the Army Surplus. Was that truly the end result you prepared for and sought after?

It’s been one year and three days since I encountered you. I’ve been running from you ever since. But…over the past few months, I’m teaching myself to stand up to you with compassion and love. I’m far from forgiveness in the truest sense of the word. It might take me a whole lifetime, but I’m confident I’ll get there eventually. You’re a part of me now. You’re next to me, ready to pounce at random triggers, jolting my mind back to images from that afternoon of June 7th. We look at each other and I fill my eyes with love and understanding, making it impossible for you to misinterpret my intentions. I never know when or where during my day I have to fight this battle, but I’m ready, each time rediscovering pieces of myself that you stole, and so much more, refilling those vast spaces within me that you occupy. I’ll never be completely whole again, I’m aware of that. It all takes its toll. But I’m trying. And that’s all that matters. Maybe all of this could have been avoided if you only did the same.

Your Friend and Enemy,